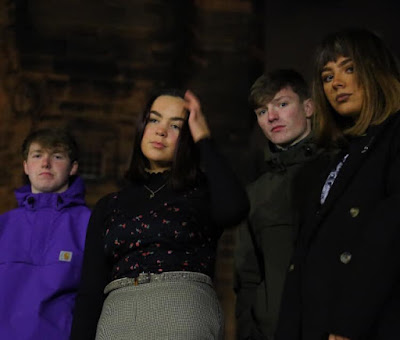 Last night saw the first gig as a four piece for East Kilbride/Glasgow combo The Spyres and what a triumph it was. Initial nerves soon disappeared and were replaced by a quiet confidence in the music they were sharing with us in a packed Audio. This is a band mature beyond their years and a band who certainly know how to write a tune. Distilling the influences of the likes of Sonic Youth, PJ Harvey, The Mary Chain and The Van T's, among many others, into something that sounds uniquely like The Spyres is no mean feat but Emily, Keira, Jude and Alex pulled it off in style last night. Having only recently expanded into a four piece, with the addition of Jude on bass and Alex on drums, last night showed how quickly they are developing as a band and are definitely a name to watch out for in the months ahead. The voices of both singers perfectly complement each other and the new rhythm section has undoubtedly added an extra element to their sound. Having recently watched Rip It Up on The Beeb and agreeing with Vic Galloway about how vibrant and exciting the music scene is at the moment in Scotland was only further added to after seeing The Spyres in a great venue in the heart of Glasgow. I sense exciting times ahead for this young band and look forward to hearing what comes next.