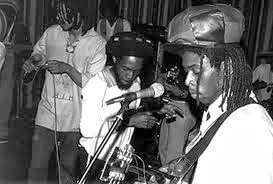 The Natural Ites were formed in Nottingham in 1982 with backing by an ever changing line-up known as The Realistics, arriving on the scene as Britain was enjoying a run of successful homegrown Reggae groups such as Aswad, Steel Pulse, UB40 and Black Roots and went on to produce some of the most sweetly, melodic Roots anthems of the 80's with "Picture On The Wall" being the most well known.

Back in 1983, I came across "Picture On The Wall" in the same way that a lot of others did, hearing it numerous times on Radio 1 between ten and midnight with a radio stuck to my ear under the duvet. The single hit the number 1 spot in the UK Reggae chart and also made it into Peel's Festive Fifty in 1983, reaching number 10.

As everyone knows Peel championed reggae music throughout his time at the Beeb and was certainly responsible for introducing me to some wonderful reggae tracks over the years and none more so than this great track from The Natural Ites.

Picture On the Wall
Posted by Scott at 8:00 AM