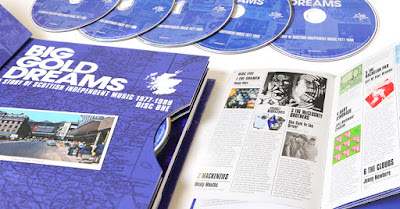 Released in 2019, Big Gold Dreams documents the vibrant independent music scene that emerged in Scotland in the late 70's and 80's. Named after (The) Fire Engines single and Grant McPhee's fascinating documentary of the same name it includes many of the Scottish music scene's most important names as well as countless lesser known bands.

One of the many bands included are Article 58 with their fast and frantic debut single Event To Come. Echoes of fellow Scots Josef K are evident in their only single released in '81, which was co-produced by Josef K guitarist Malcolm Ross and Postcard boss Alan Horne. Cited by Davey Henderson as an influence on (The) Fire Engines, it's one of those tracks that has kinda got lost in the midst of time but thanks to Big Gold Dreams it can be heard once again in all its glory. Article 58 was the first band of Douglas MacIntyre who now runs the wonderful Creeping Bent label (think Nectarine No. 9, Secret Goldfish, Monica Queen) and has also played in countless Scottish bands including Love and Money, The Sexual Objects, The Jazzatears and his latest project Port Sulphur.

Port Sulphur are a bit of a who's who of Scottish music, featuring members of The Bluebells, Aztec Camera and Orange Juice amongst many others. Recently released album, Compendium, runs the gamut from jangly pop rock through to synth driven tracks reminiscent of early Simple Minds and is one of the most varied albums you are likely to hear this year. What other album this year are you going to hear the likes of Alan Vega, Davey Henderson, Vic Godard and Ken McCuskey on. It is presented as a musical triptych - Biblioteca, Paranoic Critical and Companion Set - and is an album that you want to listen to from beginning to end. No pre-programming for this one, it is that rare beast that commands your attention from the moment you press play.