It's Written All Over My Face... 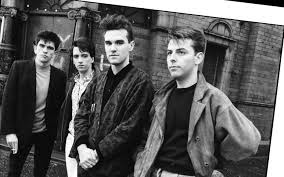 A discussion ensued in the pub last night about a recent post that was on Facebook where people were asked to name their first gig, last gig, favourite gig and next gig. As I am not on Facebook last night was the first I had heard of it. First, last and next gigs were straightforward enough. For me it was The Cramps, Hinds and Patti Smith. I struggled, however, to get favourite down to about a dozen but will try and narrow it down for a future post. Someone at the table had Hawkwind as his first gig, so the less said about that the better.

Obviously, we then added on our own gig related questions, one of which was which band would you like to have seen live that you didn't get to see. There were a few rules, primarily that we couldn't go for a gig where we couldn't possibly have been there. For example I couldn't opt for The Pistols at Manchester Lesser Free Trade Hall as I was barely out of short trousers at the time.

I have mentioned a few times previously on Spools how lucky we are in Glasgow to get so many bands playing here and how fortunate I have been over the years to get to see so many of my heroes. But there is one band that I have never seen that I could have seen as they were still performing live when I started going to gigs.

Without any doubt whatsover, The Smiths would be in any rundown of my favourite bands and yet I never got to see them live. Why I don't really know, as from the first time I heard them on Peel I was hooked and I own pretty much everything they have ever recorded. It is the one gaping hole in my gigging history, so I will just have to make do with listening to some of the greatest music recorded by any band ever.

I could have picked any number of tracks tonight but am going to go for one that has always held a special place for me, and has one of The Smiths best lyrics, especially this wonderfully, true to life couplet, A double-bed and a stalwart lover, for sure, these are the riches of the poor...