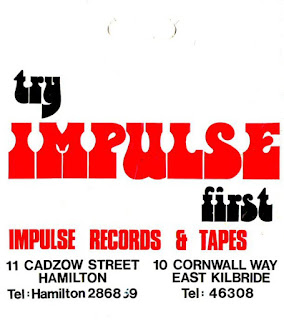 For most folk that knew me throughout my fornative years it was no great surprise that I would end up working in a record store. Little did I know when I walked into Our Price in the Sauchiehall Street Centre for my first day, in November 1988, that I would still be working for them almost 14 years later. Going to record stores had always been a big part of my life since I started buying records in the early 80's, but to work in one was something else. By the mid 80's all my spare money was being spent on music. I took on a paper round when I was about 12 to finance my burgeoning vinyl habit, before moving onto a part time job in Victor's chip shop, the original one close to EK's wonderful 2 screen cinema, to further the desire to buy what I was hearing on Kid Jensen and John Peel's essential radio shows. No Saturday was complete without a trip into Glasgow to vist the many record stores the town had to offer at that time. First stop was the Virgin Megastore on Union Street, followed by Lewis's, Listen, A1 Sounds (in the Savoy Centre) and my illicit visits to listen to the latest reggae releases in Ital Riddims on the corner of Buchanan and Sauciehall streets. For anyone not aware of Lewis's, it was a department store on Argyle Street with a lavish food hall and a great selection of vinyl. I still vividly recall, amongst many others, buying Siouxsie And The Banshees Ju Ju album in there with my hard earned paper round money. The Virgin store was a great place to hang out and people watch as it was where all the punks would gather on a Saturday afternoon. In my hometown of East Kilbride we were very lucky to have the wonderful Impulse records, where along with all the latest records, you could also buy t-shirts, badges, patches and posters. By the mid 80's I was never out the place, what better way to spend an hour or two.

As the 80's progressed I tended to shop more up The West End in the likes of Echo and John Smiths on Byres Road, as well as Rat Records and Fopp in the city centre. Today Glasgow is home to Love Music, Mixed Up, Missing, LP Records, Oxfam Music on Byres Road and the ever excellent Monorail alongside HMV and Fopp and continues to live up to it's reputation as a city steeped in music and music lovers. Gone are the days of queuing outside Impulse for the new Jam album but the memories of spending my teenage Saturday afternoons in these special places remains a source of pleasure to this day.