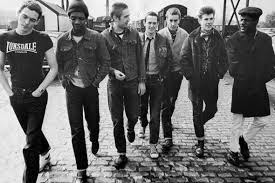 I've never been a huge fan of live albums as it's hard to feel the energy and excitement of a gig coming through your speakers at home. This afternoon I bought The Specials Live At The Moonlight Club and have to make an exception in this case. Recorded two months before the release of their debut single Gangsters it captures what I imagine the band's early performances must have sounded like perfectly and transports you back in time to that intimate club in West Hampstead in 1979 before they became on of the hottest musical proprties in the country. I was too young to see them live in the late 70's/early 80's but was fortunate to see them a couple of times a few years back in Glasgow and witness first hand what a formidable live act they are.

I would have been about 10 years old when I first heard The Specials and instantly knew then what would be at the top of my Christmas list that year - Dear Santa, could you please bring me a copy of The Specials album. Thankfully my letter got through to him and for the next few months it was never off the turntable. To this day it would be in my Top 10 albums of all time and still gets played regularly. Looking back it wasn't just the music, it was the clothes and style that went along with it. I loved the look of the band and the image they had. Has there ever been a cooler loking band ? Every member of the band brought something to the table and pretty soon I had all the gear, heading out to under 18's discos with my Harrington jacket, skinny tie, pork pie hat, stapress trousers, Dr Martens and the obligatory crew cut. We were very fortunate in East Kilbride to have a great wee shop called Rig Out where you could buy all the 2 Tone and Mod gear and it soon became my first port of call on a Saturday morning. Fashion and music defined a lot of young people in those days and I was now a fully fledged 10 year old Rude Boy. 2 Tone's mix of ska, rocksteady and punk spoke to something in the young me that no other music at the time did. I was also listening to bands like Blondie, The Undertones and The Jam but there was something about the music of The Beat, Madness and particularly The Specials that connected with me and made me feel like I was part of something new and exciting. I still vividly recall going on seaside holidays with my parents in the late 70's/early 80's, to places like Scarborough and Morecambe, and being totally in awe of all the teenage Rude Boys and wanting to be about 6 years older so I could hang out with them.

Mostly made up of original material with some great covers thrown in The Specials debut album is that rarest of beasts, an album that manged to blend all the anger, disillusionment and bitterness of the day straight into their music. Produced by Elvis Costello who managed to capture their live sound perfectly it is an album I still enjoy as much now as I did back in '79. Perfectly encapsulating Britain in '79 just as we were about to enter eighteen years of Tory rule. Few, if any, other bands have captured a moment in time as well as The Specials did on their debut album. The follow up album, More Specials, is a very different sounding abum but is every bit as good as the debut. Less frenzied than their debut, but certainly more adventurous musically it includes  elements of jazz and soul, with more original songs and more collaborators in the likes of Belinda Carlise and Lee Thompson. The band certainly widened their palette and More Specials shows the direction the band could have been heading in if they had managed to stay together.

Email ThisBlogThis!Share to TwitterShare to FacebookShare to Pinterest
Labels: The Specials