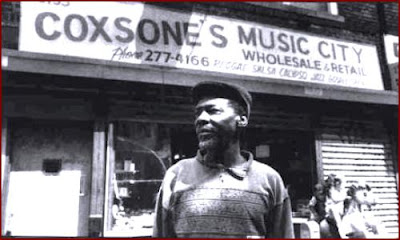 Known to some as the Motown Of Jamaica, Studio One was was involved with most of the major music movements in Jamaica during the 1960s and 1970s, including ska, rocksteady, reggae, dub and dancehall. Studio One discovered many reggae artists that went onto to become legends throughout the world, most notably The Wailers whose early recordings were released on the label founded in the early 60's by the one and only Clement 'Coxsone' Dodd.

Also on the label were The Skatelites of  Guns Of Navarone fame. They were also the house band, playing on releases by the likes of Prince Buster and on The Wailers debut single Simmer Down. Like many others of a certain age my introduction to The Skatelites was through The Specials, in particular the Too Much Too Young E.P. Fast forward a few years and I was discovering these wonderful old reggae and ska songs that had such an influence on the 2 Tone bands here in Britain. Through John Peel and Ital Riddims in Glasgow I was hearing, and starting to buy, these records that were made thousands of miles away in Jamaica but spoke to something in me.

The world of music owes a huge debt to Clement Dodd, without whom much of this music may never have seen the light of day, and to the 2 Tone bands of the 80's who revitalised it for a younger generation.

Email ThisBlogThis!Share to TwitterShare to FacebookShare to Pinterest
Labels: Reggae, Studio One