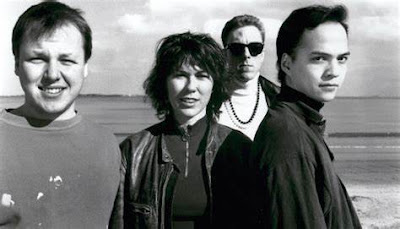 Between '86 and '89 there was barely a week went by where I would not be found at one gig or another. Apart from The Barrowland, most of these would have been at Glasgow Uni, Strathclyde Uni or Glasgow Tech with a few others at the likes of Fury Murry's, The Mayfair or 46 West George Street. Over the first few years of gig going I had the pleasure of seeing the likes of The Shop Assistants, Go Betweens, 10,000 Maniacs, Pixies, Sonic Youth, James, Age Of Chance, The Sugarcubes, The Bodines, The Pastels, The Mighty Lemon Drops and The Wedding Present amongst many others.
Both the Universities and The Tech played host to many great bands and were essential to the gig scene in Glasgow before the likes of King Tut's and the much missed ABC. If it hadn't been for these venues it's unlikely I would have had the chance to see most of those bands in their prime.

Two that really stand out for me from that time are The Pastels, supported by The Vaselines in Fury Murry's and Pixies at Glasgow University. The Pastels had not long released Up For A Bit and that evening started a lifelong love of both them and The Vaselines. Both these bands are much loved and that evening in Fury's clearly showed why. I do recall being a bit worse for wear at the Pixies gig and missing the support band completely. I managed to rally just as Pixies hit the stage. Doolittle had just been released and we were amongst the first people to hear these songs live. Glasgow took Pixies to their collective hearts and made sure they knew how loved they were in this part of the world. I've seen Pixies a few times over the years, but none will match that very special evening in The QMU.

Email ThisBlogThis!Share to TwitterShare to FacebookShare to Pinterest
Labels: Pixies, The Pastels