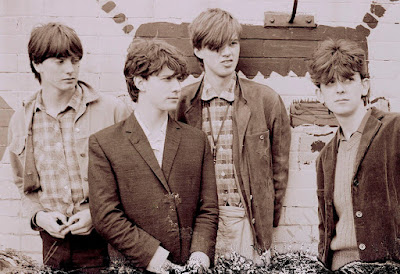 Comprising a couple of re-recordings of early singles, cleaned-up versions of demo tracks and a few new tracks the debut album from Orange Juice was released on this very day in 1982.

You Can't Hide Your Love Forever is chock full of timeless pop tunes, with some great songwriting from both Edwyn Collins and James Kirk. The debut album from Glasgow's finest purveyors of The Sound Of Young Scotland is one of the best, and most underrated albums of the 80's. At the time some thought it did not live up to expectations, possibly due to a bit of musical snobbery due to signing to a major after releasing their first singles on Postcard. In reality, what's so great about the album is that it sounded so different to anything else at the time and how much it would influence what would follow. Infusing their obvious love of punk with their love of soul it stands as one of the truly great British debut albums.

With lyrics that are cutting, witty and romantic, excellent guitar interplay between Collins and Kirk and a great rhythm section from David McClymont and Steven Daly this is an album like no other.

Also you can't really go wrong with an album sleeve featuring a couple of lovely dolphins swimming together in the sea.