A Little Bit Of Melodic Sunshine 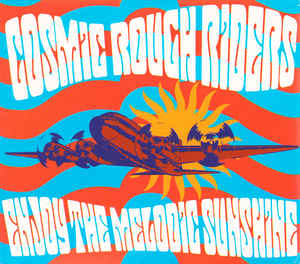 Late 2000 I was nearing the end of my time working in record stores, and was not really enjoying listening to music as much as usual. There wasn't much that piqued my interest at the time and I was opening those new release boxes on a Friday afternoon hoping to find that elusive something to get my musical mojo up and running again.

Step forward Enjoy The Melodic Sunshine, courtesy of Glasgow's very own Cosmic Rough Riders. I knew the name, but not too much else at that time. Something about the cover intrigued me enough to put it on and have a listen, and I was not disappointed. Well crafted, melodic tunes played with honesty and sincerity, this was just the tonic I needed to appreciate quality music again. I could hear so much of my favourite music in there - The Byrds, Neil Young etc - but this was uniquely Cosmic Rough Riders. I've always thought the title of the album perfectly sums up the tracks within, music that is uplifting and just makes you feel good.

Essentially a compilation of tracks from their first two albums, it's an album I never tire of listening to. Similar to Teenage Fanclub with Big Star, the album was responsible for me appreciating more the sounds of the likes of CSNY, Buffalo Springfield and Fairport Convention. A couple of Top 40 hits ensued (and an appearance on TOTP) but like The Go Betweens and Trashcan Sinatras it remains a mystery as to why every household doesn't know their wonderful music.

The album is being reissued on vinyl later this year from those lovely folks at Last Night From Glasgow, on four different vinyl colours. Well recommended for fans of timeless, melodic tunesmithery.